Have you ever read something and said aloud to yourself, “I’ll be damned!”? Last night, this happened to me.

Last night, I was reading Priya Parker’s book “The Art of Gathering” and I got to a section called ‘Etiquette Vs. Pop-Up Rules.’

In it, Parker discusses how:

“the etiquette approach to life is …imperious. It is the opposite of humble. It shows minimal interest in how different cultures or regions do things.

[It is] not interested in variety or diversity, or the idea of different strokes for different folks. At Junior Cotillion, we didn’t learn the dances of Compton, Spanish Harlem, or Appalachia. We learned the Foxtrot. We acquired its idea of the universal access code for appearing polite.” (p 120)

She goes on to discuss how etiquette is fixed, imperious and exclusionary. (To be fair, she also gives her days in Junior Cotillion their credit for teaching her many wonderful skills.)

She contrasts this etiquette with the pop-up events that have become quite popular. The kind where rules are clearly defined–typically on the invitation itself. For example, there are tech-free “unplugged” weddings; dinners where no one is allowed to share their last name or their title, nor are they allowed to photograph the event once the meal has been served; and Jeffersonian Dinners, where guests may only address the table rather than only the person next to them.

Etiquette Versus Rules: A Surprising Paradox

What fascinated me about her analysis was this: We live in a time of such diversity that explicit rules help.

This is why I myself fell in love with restorative practices; particularly circle processes. What makes them radically inclusive is that they give everyone voice but they also have no implicit culture, cues or etiquette that cannot be easily shared. One must not prepare or be a part of the group for years to catch on to subtle nuance. A newbie can easily join in from the start. This is because at the onset, everyone co-creates explicit guidelines that will be followed during their time together. Everyone has an opportunity to say what they think, and this is done in a true consensus process.

I am the product of an upbringing where there were different sets of rules depending where you were. As many can probably relate, it can be confusing as to which rules to defer when the group is no longer homogenous.

Living in a society of so much wonderful difference, particularly in workplaces, sometimes I know I feel damned if I do, damned if I don’t.

Etiquette of all kinds is something I know well. My mother, who grew up without, but who is white, was given the gift of intellect. She went to Columbia a year early only to start working in a bank and then on Wall Street. Never finishing college, because it was only a path to earning, much of her success was about observing and properly learning etiquette and social graces. My mom knew well how to be invisible and how to be seen exactly when appropriate, especially as a woman- particularly as one in a traditionally male profession and a person of lower class and a field of work that catered to the 1%.

Knowing etiquette to a tee, my mom also knew exactly how to eschew it. She told me when to be loud or say something embarrassing (or just out of the norm) to deflect attention away from someone else in the room. How to discuss the undiscussables – like money or an unpopular belief. This is probably because someone did this for her at points along the way, or because she wished they had.

My father grew up with money, shirked it, and then made his own again. I think money was synonymous to power to my father for many of the classic reasons. But more than anything, as a member of a (Holocaust) survivior  family, it was always known that wealth in his case literally bought freedom. Had my grandparents not had access to capital, who knows what our family story would be.

My dad was the type to wear Tommy Bahama shirts to black tie weddings and jeans with a suit jacket whenever possible. He was famous for saying, “My money is as green as theirs.”

I used to think this was a way of speaking truth to power. It wasn’t until later in life that I began to question that only some could get away with these antics.

I recently attended a talk delivered by Lilliana H Mason at the University of Maryland. As a nation we are living divided, she said. We live in different neighborhoods, attend different houses of worship, watch different television programs, and more. The place we intermingle most is still work.

So, if that’s true–where and how do we produce the best products? How do we innovate?

Perhaps it’s time to eliminate traditional ‘etiquette’ as we know it.

If so, how can we make sure we are communicating productively and still respectfully?

My money is on starting with a set of explicit guidelines that everyone has a voice in creating. Then, we move into values.

If you’re here, you’re already in dialogue and the work has begun.

Still confused? Or want to talk this through a bit more? I’d love to; this stuff is my specialty.

As you think about your plans — both at work and at home — for this year, I invite you to learn more about Graymake, LLC and the opportunities we have available for you and your employees.  To set up a 30-minute phone chat with a member of our team, sign up here or email ahilb@graymake.com. 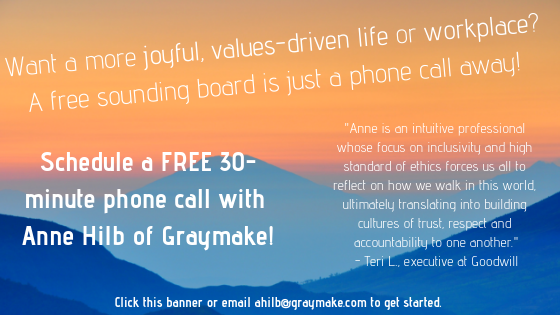 Find yourself wanting more content from Anne Hilb and the Graymake team? Sign up for the Graymake newsletter for tips and tricks on how to make your organization and your personal life run more smoothly and effectively!

Think of it as a friend who comes around once a month full of ideas to help you learn, do, and become better at your work, communication and life. (What do you have to lose?)

View all posts by ahilb